The Herzog August Bibliothek (HAB) in Wolfenbüttel was an early modern hub of knowledge and scholarship. It is still today. I recently had the chance to visit the library and work with early modern prints, mostly collections of treaties from about 1650 to 1750. Treaties of all kinds were collected and published to inform a larger (literate and often political and/or scholarly) audience about the relations between realms. An early modern newspaper, chronicle, and database all-in-one. Such news was considered highly relevant in an age of nearly constant European warfare in which you’d like to know why a foreign army is standing on your doorstep. Furthermore, Wolfenbüttel itself was involved in the many European wars of the period, often providing troops or other fiscal-military resources.

The Reading Room for most books and other materials is actually in the old Armoury (Zeughaus), across the street from the main library building

Back to Wolfenbüttel - an impressive library with a tiny town around it. This was the residence of the dukes of Brunswick-Lüneburg, a side branch from the house of Welf. Julius of Brunswick-Lüneburg (1528-1589) established the first library at his residence in Wolfenbüttel based on his own collection and that of the Humanist Michael von Kaden. More book collections were soon added, and the library quickly became one of the biggest north of the Alps. Duke August, after whom the library is named today, was an avid book collector who sent his agents all over Europe for books, denying himself the chance to travel and go wild in bookshops himself. When he became duke during the chaos of the Thirty Years’ War, he managed to save the library from the plundering Swedish soldiers. When he died in 1666, the library boasted already 135,000 titles, and that was before Leibniz and Lessing became librarians there.

Today, the palace and the diverse library buildings seem much too big for this sleepy little German town with charming half-timbered buildings (Fachwerkhäuser) and small streets.

In short: a perfect place to do research without any distractions. Visiting scholars are welcome here, and a lively academic community can be found in the libraries. The town has about 52,000 inhabitants (in 2018), and the library’s 165 staff members take care of about 1,000,000 media units - so about 20 media units per inhabitant (rule of thumb). Even just compared to the units before 1850 (ca. 400,000), for each inhabitant there are 8 old books, or journals, or drawings, etc. About 200 scholars use this library each year while staying a bit longer. The library each year funds a few of them to give them worry-free time to fully focus on their work. 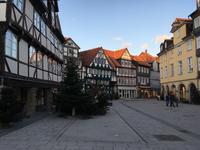 The streets of Wolfenbüttel

Furthermore, visiting scholars can use guest houses like the Anna Vorwerk-Haus to have a practical longterm-accommodation as well as join a community of other scholars, most likely also early modernists. At the moment, just make sure that you announce yourself on time due to limists how many visitors can use the reading rooms at the same time.

The reading room in the Zeughaus is for about 20 scholars, but there are also reading chairs in the modern libraries. Pictures (without flash) are permitted as long as you are careful with the reading materials. In case, you’re wondering – I never had such an intense introduction on how to take care of old books, how to arrange reading aids, and how to turn a page as in Wolfenbüttel – and I studied book history! However, if you are reading really fragile materials, you will need to view them in the main library building. It is more beautiful, but you’re not allowed to take pictures there, and depending on the material, it might not be even possible to digitise this stuff. Gives you a whiff of doing research in the very traditional way, and an appreciation for everything that is possible today. And what has been made possible by the huge digitalisation projects in the HAB already – take a look at their catalogues, and find out if your materials are already online and free for use! If you really want to immerse yourseld into the early modern scholarship, use the Latin website .