Staying fit in the archive is not easy. Hunched over, hour after hour, reading through documents, backs get sore. Legs cramped. It’s a recipe for ill-health. Sure, there are a few unorthodox ways to try to get in the doctor-recommended half-hour of fitness a day. Sprint up the stairs to the reading room. Order that 1,000-folio, 75-pound manuscript. Slowly walk it to your desk on the far side of the Sala di Studio, arms throbbing. Feign disappointment when you pretend you ordered the wrong one. March it back. Repeat until the archivists catch wise. (Please note: Do not in fact do this!) 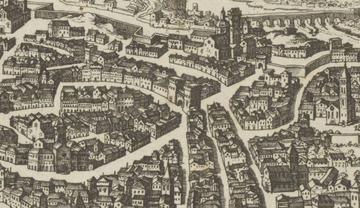 But Genoa has a far better remedy: the Parco Urbano delle Mura (City-Wall Park) - the tree-filled, 617-hectare urban park encircling the city. Indeed, a stroll (or trail run!) from the Archivio di Stato di Genova up to the Parco offers not only great exercise after a long day archiving, but a splendid journey back through the history of the city’s walled fortifications. From the archives (closed early on Mondays, Tuesdays, Fridays, and Saturdays) take a hard right then a soft left down the Salita S. Leonardo (enjoy the descent for now) to the Fascist-built, angular Piazza Dante. As you walk up Via Dante towards Piazza De’ Ferrari, gaze up to your left at the Pòrta de Sant’Andria (also called Porto Soprana), the towering gateway to the old city. While the white gate and towers are the result of heavy nineteenth-century restoration by Alfredo D’Andrade, the Pòrta was once the eastern-most entrance to the first notable circuit of urban walls. Begun in 1155 to defend the newly-autonomous city from the German Emperor Fredrick Barbarossa atop an earlier Carolingian circuit, the Barbarossa walls took only four years to complete, Genoa’s whole population (according to the famed chronicler Caffaro) chipping in to enclose the final bits in a rush of patriotic spirit in only forty-three days. 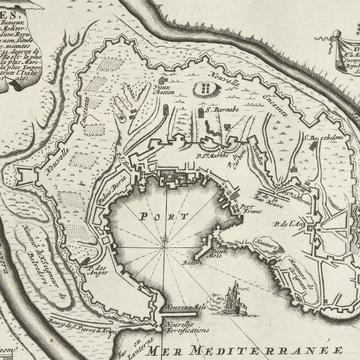 From here go on, hanging right as not to descend into the warren of medieval (and heavily-touristed) streets around the Porto Antico, making your way instead onto the Strada Nuova (since 1882, Via Garibaldi). Now this is the hard part: keep walking. Resist ducking into one of that magnificent street’s many ‘painted halls…shining out in beautiful colours and voluptuous designs’ as Charles Dickens called its dozen-or-so palaces that once housed Genoa’s great bankers during le siècle des Génois, the city’s economic peak from the mid-sixteenth century to 1627. Instead, turn sharply onto the Salita alla Spianata di Castellato up to its eponymously belvedere (viewpoint). You now stand atop one of the many bastions of the 16th century walls. Designed in the low, squat, cannon-ball-proof trace italienne style to replace an earlier fourteenth-century circuit, the walls offer both an excellent example of Renaissance military architecture (they were built by the Milanese architect Giovanni Maria Oligiati) as well as a fine view. No wonder the poet Giorgio Caproni wrote in his L’ascensore that when he died, he would ascend to heaven in the Art Nouveau funicular at the park’s peak!

Oh, yes, it’s worth mentioning that this whole ramble is accessible via a system of elevators/funiculars because the next part requires a rather steep climb to our final set of walls. From Spianata di Castellato make your way over to the Albergo dei Poveri (the poor refuge-turned-modern university building) and walk (in truth, hike) up the staircases of the Salita S. Nicolò - Salita della Madonnetta - Salita a Porta della Chiappe to the Osservatorio Astronomico del Righi (where the funicular lets out for all those who chose the easier route) and finally up to Parco delle Mura. Congratulations! You made it! From here get a commanding view of what one French cavalry officer in town to recruit men in 1704 called ‘belles vues qu'il y ait au monde’ (‘one of the most beautiful views there is in the world’) with Genoa below, the Mediterranean further, the snow-capped Alps behind. 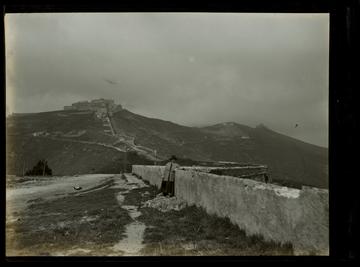 From here it’s up to you! Stroll along parts of the nearly twenty-kilometer New Walls, begun in 1626 following the city’s near-destruction by a combined French-Savoyard army in 1625 (a victory only secured thanks to a Spanish relief force). Or visit the hulking Forte Sperone, built on the site of vicious fighting during the Austrian siege of 1747. Or maybe, if you’re wildly ambitious, walk the whole circuit down to the Laterna, symbol of the city, hugging to your right Sampierdarena, the beach-turned-warehouse district that is the center of my current research on the transportation of troops, war matériel, and money through the city in these centuries. You decide!

Just remember that tomorrow you will have to drag your tired legs up the Salita S. Leonardo to the Archivio to hover once more over documents. Now wasn’t that better than hauling manuscripts up and down flights of stairs, archivists (quite rightfully) shaking their head at you?!

Middle: Map of the Fortifications of Genoa published in Paris (1693-1697) (Rijksmuseum, Amsterdam) *Note the inner 16th-Century Bastion Forts including the Castelletto as well as the outer Nuove Mure.