Lost and Found: the Heritage of Amsterdam’s Golden Arms Trade

One of the most commonly heard complaints from anyone studying early modern military entrepreneurs is how difficult it is to find the right source material. Central archives usually have preserved sufficient sources to reconstruct the necessities and purchases of the state. It becomes much more difficult, however, if one wishes to go beyond this perspective and aims  to get a sense of the private traders and entrepreneurs involved in the business of war. After all,  only few account books, merchant letters or inventories of trading houses have made it safely to the archives. But, now that archives all over the world are closed and travel is heavily restricted, one can only reminisce about the time when these were a researcher’s only worries. Precisely for this reason I am taking us back to my last archive trip to Amsterdam in January. Just to remind us, that even if archives are open, sources are not always as accessible or legible as one would wish…

The archive of the Brants’ family was one of the main goals of this trip. Quirijn Brants (1688-1741) looked after the interests of the Swedish branch of the famous arms and iron trading family De Geer. There is hardly any other trade that can be considered as the epitome of the business of war, than the trade in arms. First, because of the essential role of this commodity in warfare. After all, how do you fight a successful war, without sufficient access to weapons, and – equally important – ammunition? Second, its scope was international. It is this that enables us to study the fiscal-military system rather than the state.

Few examples appeal to one’s imagination of the scope of this trade, more than that of Louis de Geer (1587-1652) and Elias (ca. 1570-1636) and Jacob Trip (1576-1661). After the outbreak of the Thirty Years’ War Amsterdam quickly developed into a staple market for military supply. De Geer and the Trippen contributed significantly to this development, setting up a successful and lucrative business trading in copper, iron, cannons, ammunition, and muskets, building on their commercial ties and privileges in Sweden.

Given the rarity of sources documenting  the business of war, it’s not difficult to imagine the excitement with which I travelled to the Amsterdam Archive. Especially as these sources could benefit the Baltic case study as much as my own. So, after a long wait – the sources were located in the depot in the North of the city – I could finally open the first box! Unfortunately, time hadn’t been kind to the sources. The moment I lifted up the lid to investigate the ledgers of Brants’ business, it became clear that mould had damaged it too much and it fell apart as soon as I tried to open it. The journals suffered a similar fate: they appear to have been a great food source for the many mice and rats that call Amsterdam their home (anyone who has had the pleasure of living there knows what I am talking about). Finally, an occupied micro-fiche machine prevented me from reading the letters that thankfully were preserved.

It is good to remind us that historical research is often guided by problem management. Whether it is in time of Covid-19 –  when we have no access to non-digitized sources at all – or when archives are open – when lost or illegible documents, bizarre opening times and uncomfortable reading rooms prevent us from consulting the sources as we would wish. 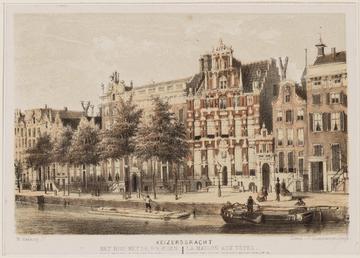 Luckily, Amsterdam offers plenty of material heritage that visualizes the city’s role in the early modern arms trade. And thanks to the enormous digitization project of the Rijksmuseum some of them can even be consulted from the comfort of our home. Others, we can put on our list for things to do when it’s possible to travel again.

After a twenty-minute walk from the city archive along the Keizersgracht you will reach the Huis met de Hoofden – the house with the heads (Ill.i). It’s quite obvious where this building derived its name: six busts –  representing Apollo, Ceres, Mercurius, Minerva, Bacchus and Diana – decorate the house front. Looking for a residence that showed his status and wealth, Louis de Geer decided to purchase the house in 1634. Even today, it remains one of the most remarkable houses along Amsterdam’s canals and definitely worth a visit.

It is a fifteen-minute walk across town, past the Dam square, to the Kloveniersburgwal to see the  Trippenhuis. Built between 1660-62 by Louys and Hendrick Trip, sons of Jacob Trip, and heirs to the family business, at a cost of 250 thousand guilders, it was one of the most lavish private houses in Amsterdam. 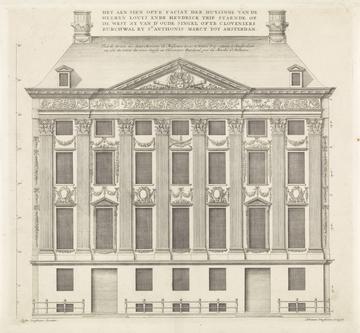 The façade leaves no doubt about the trade that earned the family its riches: it’s elaborately decorated with cannons and cannonballs and olive branches. The latter proudly represented the peace that had been achieved through war, to which their cannons had so greatly contributed.

The house is still one of the most impressive witnesses of Amsterdam’s ‘Golden Age’ and now houses the Dutch Royal Academy of Sciences. For those that cannot wait to travel to Amsterdam to see it, the Rijksmuseum has various prints of the house, including the design by architect Johannes Vinckboons (Ill.ii). 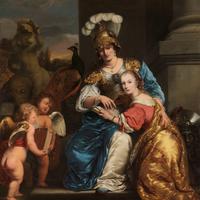 The same museum also holds a portrait of Louis Trip’s daughters Margaretha and Anna Maria, by the famous painter Ferdinand Bol. It is an allegory on education, portraying Margaretha as Minerva, the Roman goddess of wisdom and knowledge, teaching her younger sister (ill. 3).

It was common for the rich and wealthy families of Amsterdam to have their portraits painted in a way that illustrated their high standing. There are several portraits of family members of the Trippen and de Geers in the collections of museums all over the world. 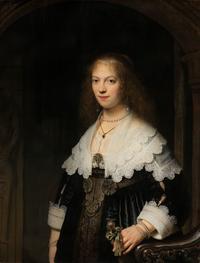 These include a portrait of a young woman by Rembrandt van Rijn, believed to be Maria Trip (ill. v) and of Louis the Geer the younger by Bartholomeus van der Helst (ill. iv). 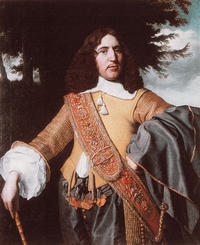 It is clear that the wealthy arm traders from the seventeenth century established a legacy that lasts until today. Traces of this can be found all over the city of Amsterdam and in museums across the world.

Kees Boterbloem, The Dirty Secret of Early Modern Capitalism. The Global Reach of the Dutch Arms Trade, Warfare and Mercenaries in the Seventeenth Century (New York 2020).