In 1689, the Dutch engraver Romeyn de Hooghe supplied for his willing readers in the United Provinces the unedifying image of the power-hungry Louis XIV seated on a globe whilst receiving an enema. This was an obvious commentary on the fact that Louis’s apparent plans for universal monarchy had suffered a severe setback in recent months and were consequently in need of reinvigoration.

King Louis XIV receives an enema while sitting on a globe of the earth, thus besmearing it with ordure; around him, chaos reigns; symbolising the events following the Protestant rebellions of 1674 including the flight of the royal family from England in 1689. Engraving by R. de Hooghe, c. 1689.. Credit: Wellcome Collection. Attribution 4.0 International (CC BY 4.0)

The War of the League of Augsburg (1688-97) had begun in September 1688 – a conflict which would ultimately see France compelled to fight alone against a powerful coalition which included the Holy Roman Emperor, the vast majority of the German states, Habsburg Spain, the Dutch Republic, and Great Britain. Following the Williamite invasion of November 1688, the latter polity was in the very early stages of adapting, in political, fiscal, and social terms, to the challenges that would inevitably arise from mounting effective campaigns beyond the country’s frontiers year on year. As historians such as John Brewer, Patrick O’Brien, and more recently Aaron Graham have made clear, Britain was taking its first steps as a newly-signed up member of an elite grouping of states in which tax revenues were steered primarily towards the waging of foreign war, be it for the defence of territorial integrity or as a member of a coalition in pursuit of broader aims. The London case-study on the European Fiscal-Military System project is intended to investigate the city’s role as a hub for what we might call fiscal-military business, involving not just British actors but also foreign agents negotiating and contracting on behalf of diverse allies on the continent. At the risk of sounding excessively Whiggish, Britain’s rise to apparent fiscal-military greatness in the eighteenth century was impelled by the perceived need to defeat France in what historians have sometimes termed “the second Hundred Years War”, from 1689 to 1815.

But there is no comparable case-study for any French city in this project. This is despite the obvious transnational and commercial importance of a metropolis such as Lyon, which enjoyed extensive and lucrative commercial links to northern Italy, the Swiss Confederation, and Germany. It may be too simplistic to say that there is an obvious reason: the facilities of which the crown could avail itself in financial centres such as Paris and Lyon were intended for the amelioration of French finances and the management of royal debt. In other words, the French government was by all means capable of tapping sources and lines of credit across Europe and transmitting money in bills of exchange through major international foreign-exchange centres (particularly Amsterdam, as per recent work by Marianne Klerk and Svante Norrhem on the delivery of subsidies from France to Sweden in the Thirty Years War). But within France, Lyon for instance did not become a hub for financial transactions that might benefit the crown’s enemies, especially given France’s own involvement in foreign wars throughout Louis XIV’s personal rule. The city was certainly not without military significance: Guy Rowlands has pointed out Lyon’s importance as one of France’s principal places d’armes, particularly for military campaigns in Italy. 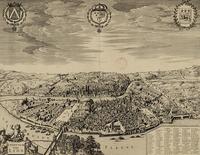 Similarly, Joel Felix and Frank Tallett have demonstrated the existence of networks of military supply for the movement of matériel that stretched across France, were centred on major cities and towns, and which were adapted according to the demands of particular theatres of war. As French geostrategic interests expanded after 1701 (during the War of the Spanish Succession), thus necessitating far greater military expenditure than during the War of the League of Augsburg, France’s own capacity to defeat its enemies came under enormous and sustained pressure, with its systems of internal supply groaning at the seams and the crown’s ability to maximise tax revenues limited at best.

Nor was it easy to cheaply and efficiently remit money abroad, due in large part to the high costs of foreign exchange. With its major quarterly fairs for the movement of bills of exchange, Lyon was a crucial financial centre within the French kingdom, until it was gradually eclipsed by Paris after the death of Louis XIV.

Isaac Thellusson (1690-1755), one of the most important Genevan bankers in Paris during Louis XV’s reign

Many Lyonnais merchants and bankers had commercial and familial ties to Geneva, to where some 5,000 Huguenots had fled in the aftermath of the revocation of the Edict of Nantes in October 1685. Insofar as international banking dynasties were concerned, the waters became increasingly murky in times of war. Entrusted with the delicate and challenging business of foreign remittances, bankers within France – most dramatically and catastrophically Samuel Bernard – scrambled to source sufficient cash in order both to meet the incessant demands of the government and to reap considerable profits for themselves in commissions and differences in rates of exchange. As Rowlands has convincingly shown, Bernard was successful in creating consortia of international financiers, particularly among the bankers of Geneva, who were willing to facilitate the crown’s need for money so long as they themselves could skim off a profit. Bernard was far less successful when it came to managing these networks for the benefit of the state, although his ability to survive crisis after crisis as the war wore on demonstrates his ability to persuade the right people that his continued prominence (and indeed, solvency) were essential to the military wellbeing of France. In July 1703, Pierre Cadiot de La Closure, the French diplomatic resident-agent to the Republic of Geneva, wrote rather scathingly that “the négociant has no scruples when it comes to the security and the wellbeing of his commerce”: his disdain could easily have been directed at the ruthless and reckless Bernard. In January of that same year, the Earl of Nottingham, Queen Anne’s secretary of state, could agree with a correspondent that ruining the credit of various Genevan bankers would “lance the source of evil” and deal a damaging blow to French military interests, which at that time were on a relatively auspicious footing.

Beyond France, hubs like Genoa and Amsterdam (both under investigation in this project) could service the logistical and financial needs of opposing states – in Genoa’s case, the Bourbons from 1701-06, and the Grand Alliance from 1707-13; while both sides in the War of the Spanish Succession made extensive simultaneous use of Amsterdam for the remitting of funds to armies in the field. The Geneva case-study, for which I am responsible, will – in conjunction with those of Genoa and Amsterdam – investigate France’s place in the Fiscal-Military System by proxy: the networks and contacts France employed beyond its own frontiers for the furtherance of its military aims will enlighten us still further as to how French state and non-state actors operated in times of war, and how French forces in important theatres were victualled and paid. Future blog posts in this series will discuss French recruitment of forces étrangères (such as Swiss, Italian, and Irish troops), by detailing arrangements for their enlisting and the conditions of their service. This will showcase the quantitative work being undertaken by the team as a whole, as we demonstrate the numbers and provenance of auxiliary and mercenary forces which characterised the system at its zenith.