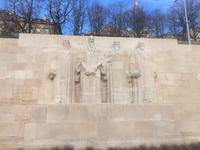 In the pretty, tree-lined Parc des Bastions, in the shadow of the medieval walls of Geneva, the famous Mur des réformateurs depicts statues of some of Europe’s most prominent Protestant theologians. The four most closely associated with this “Protestant Rome” at the foot of Lac Léman are displayed at the centre: Theodore Beza, Guillaume Farel, John Knox, and the Picardian lawyer and churchman John Calvin, whose dogged determination to eradicate godlessness from this small city led to its becoming ‘the most perfect school of Christ on earth since the days of the apostles’, in Knox’s famous words. To their left and right one finds representations in stone of other heroes of the reformed faith in the early modern era. The Lord Protector of England, Oliver Cromwell, had an unquestionable interest in the preservation of Protestantism throughout Europe in the 1650s, while Frederick William I, elector of Brandenburg-Prussia, gladly welcomed Huguenot refugees from France who fled the kingdom following Louis XIV’s decision to revoke the Edict of Nantes (which had allowed Protestants the right to worship peacefully) in October 1685. Some 5,000 of these refugees also found their way to Geneva, and settled in the city with the grudging acceptance of the local populace, many of whose ancestors had sought refuge in Geneva in earlier decades rather than face religious persecution in Italy or France. 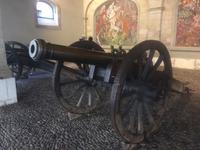 A short walk uphill from the Parc des Bastions, and nestled in the heart of Geneva’s vielle ville, one finds the Archives d’état, which house vast swathes of documents concerning every aspect of the city-republic’s chequered history. This building was once the city’s arsenal, and a number of cannon still “guard” its doors – these pieces of artillery were once used to protect the city from its enemies, chiefly the staunchly Catholic dukes of Savoy-Piedmont. I visited these archives for a week in December 2019, on a preliminary visit to gauge the quantity of material available for the purposes of researching Geneva’s importance as a fiscal-military hub in the seventeenth and eighteenth centuries. I was not disappointed. The archives privées, which contain the family papers of many of Geneva’s most important political dynasties, yielded important information concerning the activities of a number of families in the realm of merchant banking. Due to its location – between France, the Italian peninsula, and the Swiss cantons – Geneva had been an important entrepôt for trade since at least the late fourteenth century, and had hosted fairs every year for the clearing of bills of exchange until these fairs moved to Lyon in the 1460s. The loss of the fairs caused something of an economic decline, which lasted until the mid-seventeenth century. From the 1550s onwards, influxes of Protestant refugees from across the Alps – many travelling from Piedmont, the Milanese, and Tuscany – and from the French provinces of Languedoc and the Dauphiné, slowly helped to bolster the city’s economy, and Geneva had become an important financial centre by the early years of the eighteenth century.

The families involved in the potentially lucrative business of lending to foreign governments, to satisfy the perpetual demand for cash in order to fund military enterprise, have left many footprints in the Genevan archives, as well as in the repositories of inter alia Paris, Lyon, Turin, Genoa, and Bern. In Geneva, members of these families served as syndics and as members of the city’s ruling councils, while also carrying out their business as bankers in private. Among many others, the names Lullin, Nicolas, Saladin, Fatio, Calandrini and Thellusson recur time and again in official letters and memoranda. In turn, the council registers yield information concerning the authorities’ efforts to curtail the practice of counterfeiting coin – a practice for which Geneva was notorious – as well as details of military operations in the vicinity of Geneva, as two larger and more powerful political entities and mutual enemies – the duchy of Savoy-Piedmont and the kingdom of France – carried out manoeuvres in the region of Savoie in order to gain an advantage over each other. The financial connections linking Genevan bankers to other hubs which my colleagues are studying – most strikingly Genoa and Amsterdam – will require more archival research in Geneva so that they can be demonstrated as fully as possible. But it is already clear that the banking denizens of this small city occupied a crucial role in ensuring steady flows of cash – a commodity indispensable to the waging of war in this and indeed in any given period.