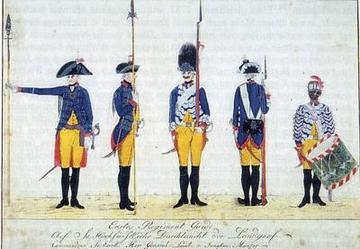 No, this is not a suggestion for insomniac military historians, though I guess you could try that: after all, King Frederick William I of Prussia used to have his ‘giant grenadiers’ march through his bedroom to cheer him up. It is actually a serious research issue. Anyone interested in ‘conventional’ military history will already be familiar with the problem of working out how many soldiers were involved in battles.

Numbers matter. They were (and are) used to determine the importance of an engagement and to assess its outcome in terms of each side’s strength and the extent of their losses. Triumphing over superior numbers has been used to measure a victorious commander’s skill, as well as the effectiveness of the successful army. An army’s ability to absorb losses is important to its capacity to continue fighting, even after a defeat. The term ‘pyrrhic victory’ derives from Pyrrhus of Epirus who is said to have responded to congratulations after his costly success over the Romans at Aseulum (279 BCE) that another such triumph would ruin him.

Numbers matter beyond simply military concerns, since they help us to assess war’s wider impact and significance. They are essential to understanding the recruiting, equipping, payment, maintenance, transportation, accommodation and eventual discharge of troops and their possible reintegration into civilian society, as well as the capacity of that society to cope with all these tasks. As such, counting soldiers forms a key part of the European Fiscal Military System project, because we are trying to quantify and evaluate the importance of non-indigenous resources to European war-making and state formation.

The mustering of troops from Jacques Callot’s series of engravings The Miseries of War, c.1633.

So how to count? The available sources are both rich and frustrating. Early modern European armies generated tons of paper records. Already by the early sixteenth century, it was common to list soldiers’ names in ‘muster rolls’ when units were first formed. As forces were maintained over longer periods, musters were held at least annually, or in some armies every six months. Muster rolls became increasingly sophisticated across the eighteenth century, recording each soldier’s name, place of origin, prior profession or service, age, religion, marital status and, often, height. They offer social and demographic historians a wealth of valuable detail, but they rarely survive sequentially or in sufficient quantity to give more than a snapshot of overall strength.

By the later seventeenth century, most armies required each regiment to submit regular monthly strength returns showing the numbers of men in each rank for each company and recording how many and joined or left since the last report. Presented on a single piece of paper, these were easier for officials to work with and added another bureaucratic check on how officers were looking after their men. Unfortunately, the survival of these documents is patchy at best, though there are good runs of them for some armies, notably that of the Austrian Habsburgs for the later eighteenth century.

Establishment lists and cost estimates provide potentially more accessible material, since these deal with the strength of whole armies rather than companies or individual soldiers. They tend to reflect the way things were supposed to be, but while we might be suspicious of columns of round numbers, these documents are not invariably less accurate than the more detailed muster rolls and monthly returns. There were always problems of double counting and arithmetical errors, not to mention fraud: officers were known to pass off their servants as missing soldiers or to borrow men from another unit when theirs was being mustered. Several armies accepted a fixed number of ‘dead pays’, allowing company officers to draw pay for a fixed number of vacancies to cover the cost of keeping the rest of the unit up to strength.

Early modern armies also distinguished between ‘presence strength’ and ‘ration strength’. The former was meant to be the number of personnel actually ‘with the colours’, while the latter indicated how many individual rations they were owed. Officers were allowed multiple rations, meaning that ration strength might only provide an approximation of how many men were present. The word ‘men’ is used here deliberately, because armies were accompanied until well into the nineteenth century by non-combatants who included officers’ servants (one of the reasons for their extra rations) and other male as well as female ‘camp followers’ who were not usually on the rolls for rations, yet were essential to the overall functioning of the army.

If all this wasn’t frustrating enough, there is the additional problem of timing, as we need to know when as well as what we are counting. While most powers had permanent garrisons and bodyguard units by the early sixteenth century, most soldiers were only recruited for a single campaign of perhaps six or even just three months. An example would be the German and Swiss troops hired by the factions in the French Wars of Religion (1562-1629). Major powers like France and Spain maintained permanent regions from the 1530s, but these were not usually of a standard size and even their official strength could fluctuate considerably over time.

Most states had permanent ‘standing armies’ from the 1660s or 1670s, but these were in fact only cadres which were filled out with new recruits at the start of each new conflict. A rachet inflationary effect set in from around 1672 whereby more men were retained at the end of each successive conflict than had been present at the start. Nonetheless, while armies appeared to grow larger, this did not mean that all soldiers were necessarily with their unit. Already in the 1670s, many German territories began furloughing soldiers in peacetime to save money, recalling them for only a few months training each year. Prussia copied this by 1733, while Austria followed suit after 1771 and continued the practice into the 1860s.

Wartime affected numbers even more profoundly. Contrary to popular belief, desertion was not as serious as often believed. Exceptional circumstances (e.g. in the wake of a defeat) aside, most armies only lost 2 to 6% of strength across a campaign this way. Disease was much worse, especially when troops fell sick in high summer or autumn. Campaign attrition could reduce effective strength by up to two thirds by the time active operations usually ceased around October or November. Units were then recruited back to strength, especially drawing on men un- or underemployed now that the harvest was in. It is thus unwise to try an calculate strength based on different records scattered across the same year.

One final question concerns us on our project: what soldiers to count? Armed forces generally reflected the fragmentation of sovereign power in pre-modern Europe. Several important states (e.g. Britain, Spain and Brandenburg-Prussia) maintained different ‘establishments’, or armies associated with different parts of what were composite monarchies. Royal guards, fortress garrisons and marines also generally counted on separate establishments. There were usually several supplementary armed organisations, some of which remained outside full central control into the later eighteenth century. These included urban, rural and national militias, civic guards, irregulars and shooting associations that might retain some connection with militia structures. A particular question for us is the status of ‘foreign’ troops who might be recruited individually or as entire regiments directly into another power’s forces, hired as auxiliaries or simply just subsidised through payments to allies.